The Fathers of Confederation 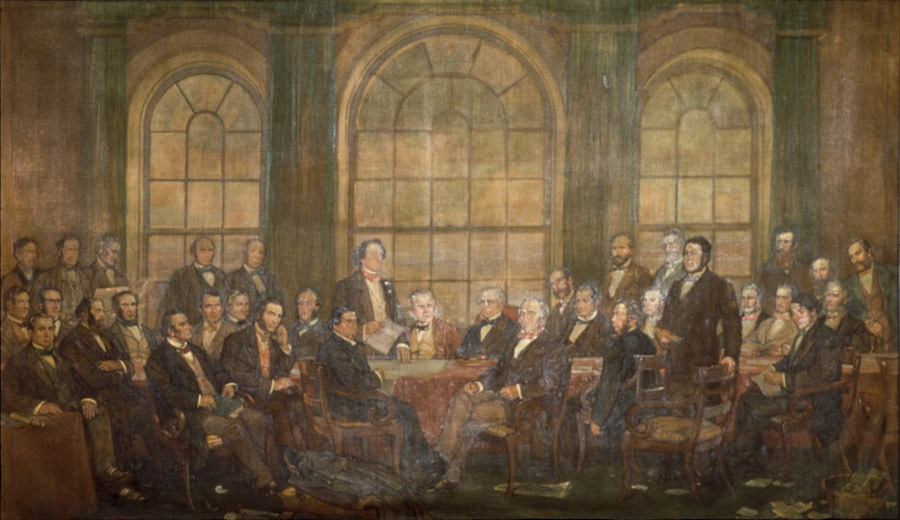 The Fathers of Confederation by Frederick S. Challener
© Government of Ontario Art Collection, Archives of Ontario

The Fathers of Confederation

High above the grand staircase in the Legislative Building is a large portrait depicting Canada’s Fathers of Confederation painted by artist Frederick Challener and unveiled in 1919.

The setting for the painting is the Quebec Conference of 1864, where delegates from the Canadian (Canada East and West) and Maritime provinces (Prince Edward Island, Nova Scotia and New Brunswick) met for a second time to continue discussing a union of the British North American provinces. The meeting at Quebec was a follow-up to an initial conference that had taken place in Charlottetown, Prince Edward Island, the previous month. At that first gathering, delegates from the Canadian provinces had put forward the idea of a union between their region and the Maritime colonies – a notion that was accepted positively by Maritime delegates. Based on successful discussions in Charlottetown, delegates proposed meeting again in Quebec City to pursue the possibility of a constitutional proposal.

The Quebec Conference was held in the Old Parliament Building in Quebec City from October 10th to 27th.  Delegates to the conference included most who had attended at Charlottetown, including John A. Macdonald, George Brown and George-Étienne Cartier for the Province of Canada, and Charles Tupper, William Pope and Samuel Tilley for the Maritimes. Observers from Newfoundland were also once again in attendance.

The agenda expanded on many of the topics about the structure of a new federation that were first tabled in Charlottetown. They included preservation of ties with Great Britain; a bicameral system including a Lower House with representation by population (rep by pop) and an Upper House with representation based on regional, rather than provincial, equality; responsible government at the federal and provincial levels; and the appointment of a governor general by the British Crown.