A portrait of Major-General Sir Isaac Brock, one of the greatest military heroes from Ontario’s past, is displayed prominently in the lobby of the Legislative Building.

Brock took over command of the British troops in Upper Canada (now Ontario) in 1810 following a series of successful military campaigns in Europe where he proved to be an effective and skilful leader. The following year, Brock also took on the duties of President and Administrator of Upper Canada, temporarily replacing the Lieutenant Governor who had returned to England on leave. While serving in this position, Brock realized that war with the United States was imminent and began taking measures to defend his colony. In so doing, he strengthened ties with the First Nations in the region and forged an alliance with the Shawnee Chief Tecumseh. Brock knew that without the support of First Nations warriors, a British defeat in any upcoming conflict was all but guaranteed.

Shortly after the official declaration of war, Brock achieved a crucial victory at Detroit thanks to his First Nations allies. In August 1812, Brock bluffed American General William Hull into surrendering by surrounding Fort Detroit with First Nations warriors and militia soldiers that numbered only several hundred. He intimidated the American leader by lying about the number of his troops, indicating that there would be a bloodbath if there was no surrender. To assure the Americans bought into the belief that the British far outnumbered the US forces, he created the illusion that there were many thousands of soldiers under his command by having them appear and reappear at various locations near Fort Detroit. Hull eventually surrendered based on the deception, resulting in nearly 600 US troops becoming prisoners of war. Brock was knighted for his victory at Detroit.

Several months later, in October, the Americans led a major assault against Upper Canada at the Battle of Queenston Heights. During the attack, US soldiers crossed the Niagara River and began scaling the 300-foot cliffs near Queenston towards the British positions. An American military victory would mean that an important foothold in Canada would be achieved, placing British control of Upper Canada in peril. Aware of this danger, Brock decided to lead his troops in a daring counter-attack, placing himself at the head of his men as he raced into the fight. His height and officer’s uniform made him an easy target for an American sniper. The Major-General was shot in the chest and mortally wounded. General Roger Sheaffe took over command of the British forces and managed to hold off the American attack, achieving victory at this crucial battle. Brock was recognized as a Canadian war hero for his valour. To honour him, a monument in the form of a tall Corinthian column was erected atop the heights looking over Queenston where his body remains entombed in its base. 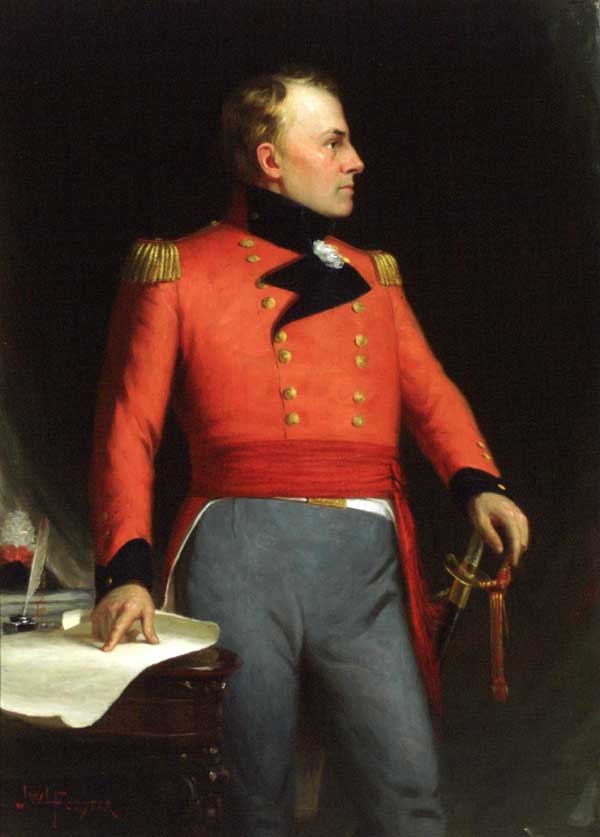