On September 1st, 1909, a devastating fire destroyed the west wing of the Legislative Building. A wayward spark from a charcoal burner used in roof repairs was blamed for starting the blaze.

The fire spread quickly. Despite staff efforts to extinguish the fire and carry documents to safety, damage to the west wing was extensive. The Legislative Library was completely destroyed and approximately 100,000 books and public records were lost.  Fortunately the Legislative Chamber was not damaged - MPPs and staff formed a human chain in front of the Chamber doors to prevent the fire from spreading.

Although the fire was noticed shortly after noon, the first fire wagons did not arrive until 1:00 p.m.  Many criticized the firefighters, saying that they were late because they did not have proper directions to the building.  Others believed the delay was the fault of the building's staff, saying that they waited too long to trigger the fire alarm.  Despite the delay, the firefighters fought bravely and were able to get the fire under control by 3:00 p.m.

The total costs of the fire damage were estimated at $700,000. Luckily, no one was seriously injured during the blaze. 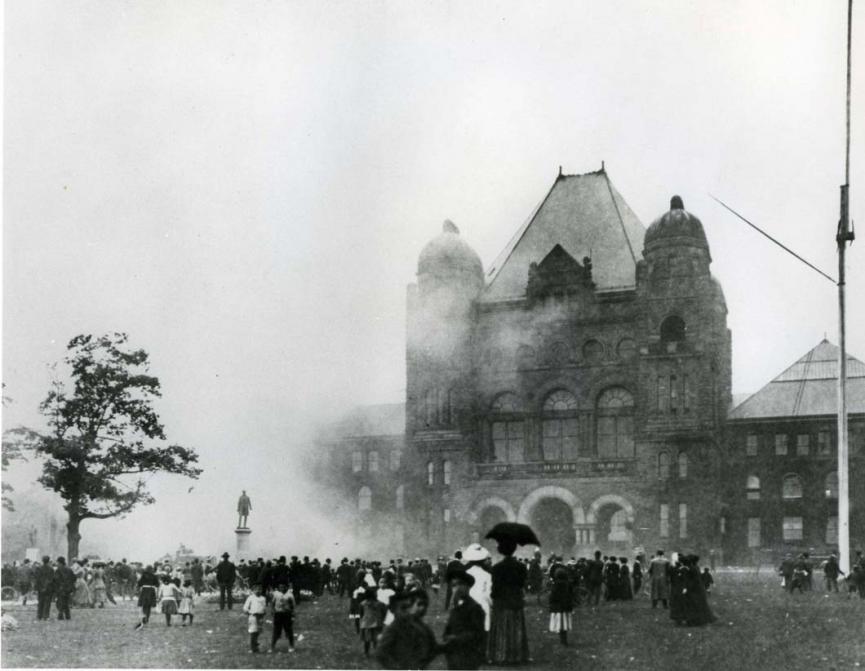 Onlookers watch the Legislative Building on fire (©Archives of Ontario)