How a Speaker is elected for a new Parliament 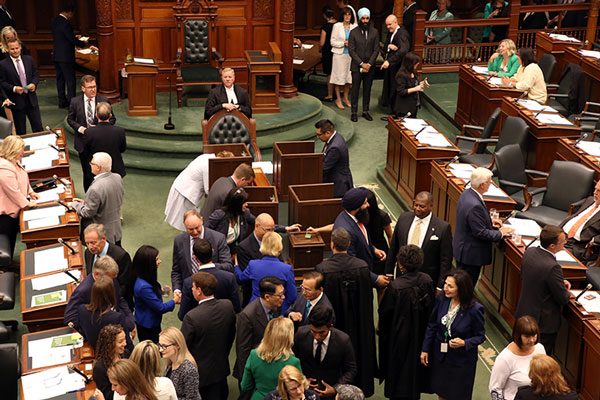 At the beginning of each Parliament, the Speaker of the House is elected before any other business can be conducted. The Speaker is an MPP who oversees the Assembly in a non-partisan and neutral way. Part of their job is to enforce the House’s rules and to maintain order in the Chamber.

The election of the Speaker takes place inside the Chamber. The Clerk will call for nominations. Leaders of recognized parties and cabinet ministers cannot be nominated to be Speaker, and they cannot nominate a member to be Speaker.

If there is only one nomination, the nominated member becomes the Speaker. If there are two or more members nominated, there will be an election by secret ballot.

MPPs write the name of the candidate they are voting for on a special ballot. Then they place it in the ballot box on the Table. After all MPPs have voted, the Table Clerks count the votes in front of a member from each of the recognized parties. The number of votes cast for each candidate is not revealed.

A candidate must receive a majority of the votes to become Speaker. If no member has a majority after the first ballot, the name of the member having the fewest votes is dropped from the ballot.

The balloting continues, with the member who has the fewest votes being dropped from the ballot after each vote, until one candidate receives a majority of votes and is named Speaker.

Candidates may withdraw after each round of balloting. In the event of a tie, another ballot is taken. The House continues to meet until the Speaker is chosen.

Read more about the role of the Speaker.

< Back to What's happening