The Honourable Ted Arnott, MPP
Speaker of the Legislative Assembly

Your Standing Committee on Regulations and Private Bills has the honour to present its Report and commends it to the House.

Clerk of the Committee

Scope of this Report and the Committee’s Mandate

Number of Regulations Made

Committee’s Process for the Review of Regulations

The Committee wishes to express its appreciation to all of the legislative staff who assisted us in our work.  In particular, we wish to thank

· Eric Rennie, the Committee’s Clerk, who performed the procedural and administrative duties necessary for the carrying out of our regulations mandate; and

Scope of this Report and the Committee’s Mandate

The Committee presents this report on regulations filed under Ontario statutes during the period July to December 2017 (O. Regs. 257/17 – 594/17), in accordance with its terms of reference, as set out in the Legislation Act, 2006 and the Standing Orders of the Legislative Assembly.  In May 2018, the Committee reported on the regulations filed during the period January – June 2017.

Section 33 of the Act (Appendix A) requires the Committee to examine the regulations made under Ontario statutes, and provides that all regulations stand permanently referred to the Committee.  In conducting its examination, the Committee is directed to consider “the scope and method of the exercise of delegated legislative power,” but not “the merits of the policy or objectives to be effected by the regulations or enabling Acts.”  The Committee is required, from time to time, to report its observations, opinions and recommendations to the Assembly.

Standing Order 108(i) (Appendix B) sets out nine guidelines the Committee is to apply when conducting its review.  Guideline 2, for example, provides that there should be statutory authority to make a regulation.  The Standing Order also stipulates that the Committee may not report a regulation to the Assembly without first affording the ministry or agency concerned “an opportunity to furnish orally or in writing to the Committee such explanation as the ministry or agency sees fit.”

The Committee’s process for reviewing regulations and preparing its Report is set out in Appendix C.

Number of Regulations Made

The graph on the following page indicates the number of regulations filed with the Registrar of Regulations from 1998 to 2017.[1]  Over this 20-year period, the average number filed each year was 521.[2]

Appendix D lists the Acts under which at least 10 regulations were made in 2017.  Appendix E sets out the ministries and offices responsible for regulations made in 2017 and the number falling under each ministry or office.

Generally speaking, a regulation falls into one of the following three categories:

· Amending – adds, removes or substitutes text in a pre-existing or “parent” regulation.

Of the 72 new regulations made in 2017, 11 were made under a statute with no previous regulations.

New Regulations Made in 2017
Under Statutes with No Previous Regulations

Following our initial review of the 338 regulations filed in the last six months of 2017, we wrote to five ministries to inquire about regulations made under ten Acts.  After considering the responses to our inquiries, we have decided to report one regulation under Committee guideline (ii):

Regulations should be in strict accord with the statute conferring of power, particularly concerning personal liberties.

Regulations are reported under the Ministry responsible.  It should be noted that our comments relate to specific provisions of a regulation, rather than to the regulation as a whole.

The Ministry responded as follows:

The Ministry will seek the requisite approvals to correct the situation.

As the Ministry has indicated that it will seek to correct the situation, the Committee is not making a recommendation.

Ministry of the Environment, Conservation and Parks – O. Reg. 388/16 (Stewardship Ontario) made under the Waste Diversion Transition Act, 2016

The Waste Diversion Transition Act, 2016 permits regulations to be made “governing the composition and appointment of the board of directors of an industry funding organization.” (emphasis added)

O. Reg. 388/16, however, provides for nine elected members and one appointed member of the board of Stewardship Ontario.  The Committee therefore asked the Ministry whether there is statutory authority to make a regulation providing for the election of board members.

The Ministry replied that

the word “appointment” usually refers to the manner in which the required number of members is selected from each class.  “Appointment” can be read broadly to include any manner of selection – whether by appointment, by election or ex officio by virtue of holding another office.

The Committee recommended that the Ministry amend O. Reg. 388/16 to remove references to the election of the board of directors of Stewardship Ontario and to elected members.

We asked the Ministry whether the “Ontario Living Legacy Land Use Strategy,” as well as the other documents incorporated by reference in s. 25 of O. Reg. 282/98, are readily available to the public, as required under s. 62(4) of the Legislation Act, 2006.

The Ministry responded that

all of the documents referred to in section 25 of O. Reg. 282/98 are available to the public at the Ministry’s office or at the websites specified . . .

The Committee recommended that the Minister of Finance amend paragraph 1 of s. 25(2) of O. Reg. 282/98 to incorporate by reference the versions of the documents that are used by the Ministry in administering the Conservation Land Tax Incentive Program.

The Ministry advised the Committee that the outdated references to publications in paragraph 1 of subsection 25(2) have been corrected by O. Reg. 583/17, filed on December 21, 2017.

Ministry of Government and Consumer Services - O. Reg. 306/16 (Code of Ethics) made under the Funeral, Burial and Cremation Services Act, 2002

The Committee noted that O. Reg. 306/16 appeared to contain an inconsistency.  Specifically, the regulation indicated that it was approved by the Minister on September 12, 2016, which is the day before the regulation was made by the Bereavement Authority of Ontario.

The Ministry’s view was that O. Reg. 306/16 was valid, having been duly made, and having been approved by the Minister. Nonetheless, the Ministry acknowledged the potential for confusion and indicated that

to address this, the Ministry . . . plans to work with the Bereavement Authority of Ontario (“BAO”) to remake the Regulation at the same time as the BAO makes a regulation respecting discipline and appeal committees, which are necessary to enforce the Code of Ethics.  Consultations are planned for summer 2017 with a view to finalizing the regulations in fall 2017.

As the Ministry committed to remake O. Reg. 306/16, the Committee did not make a recommendation.

The Ministry explained the reference to repealed provisions as follows:

The Regulatory Services Branch of the Ministry of Government and Consumer Services is currently working on a project which involves proposed amendments to various regulations under the Registry Act and Land Titles Act.  It is anticipated that the amendments to O. Reg. 427/99 to remove references to the repealed clauses can be included in this project.  The anticipated completion date would be the end of 2017 to beginning of 2018.

In light of the Ministry’s response, the Committee did not make a recommendation with respect to O. Reg. 444/16.

33(1) At the commencement of each session of the Legislature, a standing committee of the Assembly shall be appointed under this section with authority to sit during the session.

(2) Every regulation stands permanently referred to the standing committee for the purposes of subsection (3).

(4) The standing committee may examine any member of the Executive Council or any public servant designated by the member respecting any regulation made under an Act that is under his or her administration.

(5) The standing committee shall, from time to time, report to the Assembly its observations, opinions and recommendations.

108       Within the first 10 Sessional days following the commencement of a Parliament, the membership of the following Standing Committees shall be appointed, on motion with notice, for the duration of the Parliament:

i. Standing Committee on Regulations and Private Bills . . . to be the Committee provided for by section 33 of Part III (Regulations) of the Legislation Act, 2006, and having the terms of reference as set out in that section, namely: to be the Committee to which all regulations stand permanently referred; and to examine the regulations with particular reference to the scope and method of the exercise of delegated legislative power without reference to the merits of the policy or objectives to be effected by the regulations or enabling statutes, but in so doing regard shall be had to the following guidelines:

(i) Regulations should not contain provisions initiating new policy, but should be confined to details to give effect to the policy established by the statute;

(ii) Regulations should be in strict accord with the statute conferring of power, particularly concerning personal liberties;

(iii) Regulations should be expressed in precise and unambiguous language;

(iv) Regulations should not have retrospective effect unless clearly authorized by statute;

(v) Regulations should not exclude the jurisdiction of the courts;

(vi) Regulations should not impose a fine, imprisonment or other penalty;

(vii) Regulations should not shift the onus of proof of innocence to a person accused of an offence;

(viii) Regulations should not impose anything in the way of a tax (as distinct from fixing the amount of a licence fee, or the like); and

(ix) General powers should not be used to establish a judicial tribunal or an administrative tribunal,

Committee’s Process for the Review of Regulations 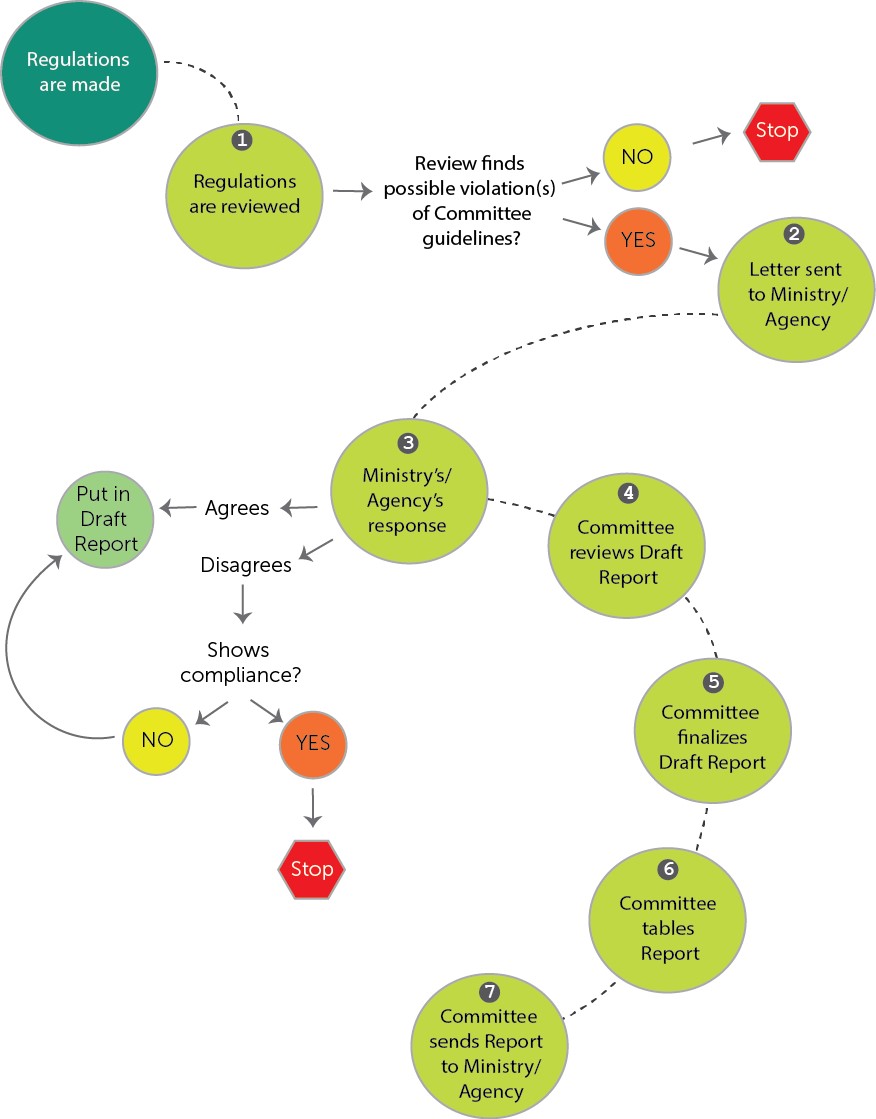 [2] The Office of Legislative Counsel has observed that “the ‘number’ of regulations applying to a given business sector (sector X) may not be indicative of how regulated the sector is. One could argue that a single 100-page regulation governing ‘sector X’ regulates sector X much more than 20 two-page regulations relating to sector X in which each of the 20 regulations regulates a separate topic. . . . The decision as to whether to draft one long regulation or several shorter ones is made by legislative counsel working together with the relevant ministry, taking into account various factors including the best way to give the public easy access to the laws of Ontario. Consequently, if you are attempting to determine how regulated sector X is, you must analyze the substance of the regulations that apply to sector X rather than counting the numbers of regulations that apply to sector X.”  (Source: Email communication from Office of Legislative Counsel to Committee counsel, March 6, 2008.)

[3] The list of Ministries used for this calculation is found on the webpage entitled Ministries, on the Ontario.ca website, at https://www.ontario.ca/page/ministries, accessed September 5, 2018.

[4] These descriptions are based on information found on the webpage entitled e-Laws definitions: A collection of terms used on e-Laws and their definitions, on the Ontario.ca website, at http://www.ontario.ca/laws/e-laws-definitions, accessed September 5, 2018.

[6] The list of Ministries used for this calculation is found on the webpage entitled Ministries, on the Ontario.ca website, at https://www.ontario.ca/page/ministries, accessed September 5, 2018.  The number of regulations for which each Ministry or Office is responsible is derived from the table entitled Public statues and ministers responsible on the Ontario.ca website, at https://www.ontario.ca/laws/public-statutes-and-ministers-responsible, accessed in August 2018.  Reference was also made to Order in Council 987/2018 to determine current ministerial responsibilities.