On the Run, 2018 - Timothy Mohan, Canadian Irish and Cree decent 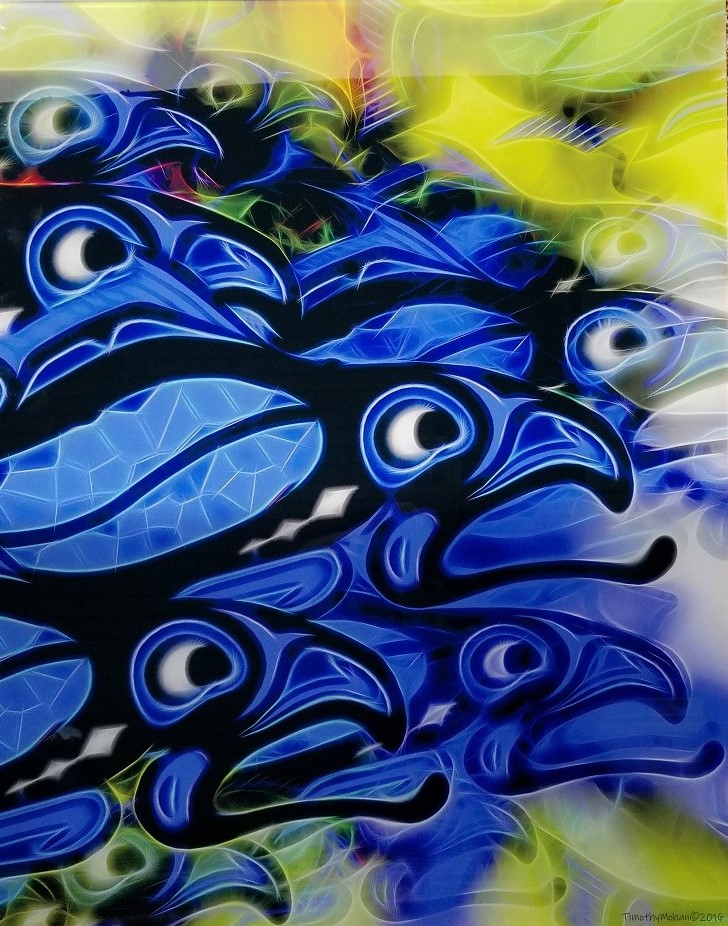 Timothy Mohan is a self-taught, colourblind artist of Canadian Irish and Cree descent. His artwork is derived from a variety of sources and inspirations, including his Indigenous ancestry, wildlife and nature, which he fuses together in a multilayered, cohesive whole. To achieve this end result, he combines different artistic mediums and applies modern tools and techniques to his pieces. Mohan strives to make a positive difference in the lives of others, and actively supports non-profit organizations by donating original artworks and prints to be used for raising funds.

Mohan was inspired to create On The Run when he was working in Hell’s Gate, British Columbia, on the air tram He was inspecting cables on the air tram, which rises 152 metres above the Fraser River, and sketched out a preliminary drawing looking down at the rushing water. For many northwest coast First Nations, the salmon symbolizes abundance, fertility, prosperity, and renewal. Mohan shares that “some people of the Pacific Northwest coast believed that salmon are immortal humans who live in villages deep under the ocean. In the springtime, they put on salmon disguises to offer themselves as food to the people. After the salmon were eaten, the people would put the full fish skeleton back in the water in the belief that its spirit would rise again and turn back into an immortal salmon person, thus creating the cycle of life.”