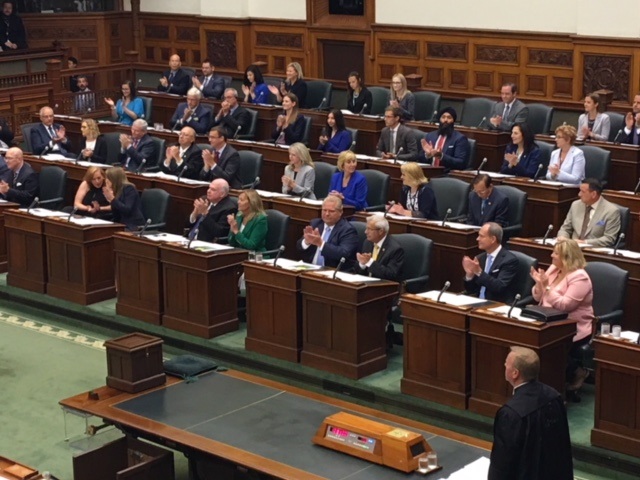 Ontario’s 124 MPPs are elected to represent the concerns of their constituents regarding provincial responsibilities at the Legislature and in their ridings. Ontario is the only province in Canada to use the term "Member of Provincial Parliament" as the title of its elected provincial representatives.

Roles of an MPP
At the Legislature, MPPs may be assigned different roles by their party leader such as House Leader or Party Whip. They may also be assigned additional responsibilities as Cabinet Ministers, Parliamentary Assistants, Committee Chairs or critics. MPPs from all parties also take part in Legislative Committees. Members that are not assigned special duties are referred to as backbenchers.

A backbencher is an MPP who is not a Cabinet Minister or party leader. Historically, he or she occupied a back bench in parliament, which is where the term ‘backbencher’ comes from.

MPPs in Their Constituencies
When not at the Legislature, MPPs have a number of responsibilities in their home ridings such as meeting with constituents to listen to their concerns, helping to resolve matters related to provincial government services, and attending community  events such as school openings or local fundraisers.

Caucus
The word caucus refers to all of the elected members from a particular political party. The political parties at Ontario’s Parliament hold regular caucus meetings.

Becoming an MPP
To be eligible to run for the position of an Ontario MPP, candidates must be 18 years of age or older, a Canadian citizen, and a resident of the province.

To become a candidate for a particular political party, individuals must be nominated by the party. Some candidates choose to seek election as independents with no party affiliation.

During an election campaign, candidates announce the ideas and policies they would propose if they were elected, seeking as many votes as possible. Candidates must follow the rules and guidelines outlined in the Ontario Election Finances Act and the Election Act.

The candidate winning the most number of votes in their riding will represent that district as an MPP at the Ontario Legislature during the next parliamentary session.