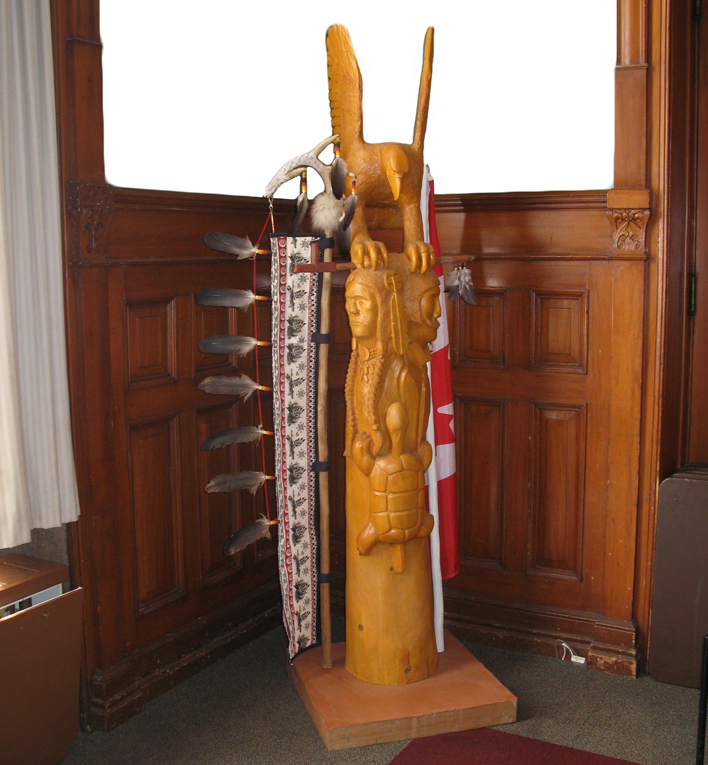 A carver who works with both wood and antlers, William Bondy has lived his entire life on Manitoulin Island. His pieces evoke a sense of spirituality, inspired and nurtured by the elders of his town of Wikwemikong. Over time, William has created his own unique moose antler carving techniques.

The piece Collaboration showcases the relationship between the Anishinaabe people and the Canadian government. Though the relationship has not always been positive, more recently we have seen the two sides begin to work together in a more collaborative, supportive, and cooperative way – symbolized by the peace pipe. The turtle joins the Anishinaabe side with the government side, representing Mother Earth and the importance of taking care of her. The thirteen scales on the turtle’s back signify the thirteen moons, or months, in the Anishinaabe year.

Viewers may be surprised to see the peace pipe included in this artwork as it is a sacred item not considered appropriate for display. However, for Collaboration, William has created a replica peace pipe, allowing it to be publicly shown. The inclusion of the sacred eagle feathers may also cause surprise. They have not been blessed, and William included them as an important symbol representing the Anishinaabe people.