Overview:
An introduction of the key roles in Ontario's Parliament, where students will develop an understanding of their functions and significance through group discussion and presentations.

Objective:
Students will understand the specific functions of each key player in provincial parliament, recognize the significance of the role and how it relates to the legislative process and government.

Curriculum Links:
PEOPLE AND ENVIRONMENTS: THE ROLE OF GOVERNMENT AND RESPONSIBLE CITIZENSHIP
Inquiry: Differing Perspectives on Social and Environmental Issues
• Interpret and analyse information and data relevant to their investigations, using a variety of tools (B2.4)
• Communicate the results of their inquiries, using appropriate vocabulary (B2.6)

Understanding Context: Roles and Responsibilities of Government and Citizens
• Describe different processes that government can use to solicit input from the public (B3.4)

Introductory Discussion (10 minutes)
The Legislative Assembly is the law-making place for Ontario. In order for laws to be discussed and made in Ontario, there are several roles in Parliament that must be filled.

• What are some roles that you are familiar with? If students are unable to name any roles, list titles of roles (e.g. Premier, Speaker, and Lieutenant Governor) and ask them to predict what role that position has in Parliament.

Activity: Small Group Presentations (15-20 minutes)
•Divide the class into groups of 2-3
•Print off the role descriptions activity sheet below and distribute one-two sheet(s) per group.
•In groups, students need to determine key details about the role (e.g. what do they wear, what they do, why is their role in parliament necessary, etc.) and prepare a minimum of 3 points regarding the responsibilities of their assigned role to present to the class. Each groups will then present  their “role” in parliament to the class (2 minutes/group).

Group discussion (5–10 minutes)
•Following the presentations, if you have access to the internet or a smart board, you can take a virtual tour of the Legislative Chamber to show students the locations of the positions. Otherwise, students can take a virtual tour as part of a home assignment, in the library or during computer class.
•Discuss why each role in parliament is necessary.
For example, who would make sure that MPPs follow the rules if there were no Speaker?

Her Majesty the Queen The Queen is the official Head of State of Canada. In her role as a constitutional monarch, she has important ceremonial and symbolic responsibilities - for example, she opens parliament each year and laws are passed in her name. The Queen is represented by the Governor General at the federal level of government, by the Lieutenant Governors in each of the ten provinces, and the Commissioners in the three territories.

The Speaker The Speaker presides over the debates from a throne-like chair in the Legislative Chamber, maintaining order and advising the Members of Provincial Parliament (MPPs) about the rules of the House. The Speaker is elected from among the MPPs shortly after a general election, and upon taking the chair, is not allowed to take part in debates and only votes in the case of a tie. While in the Chamber, the Speaker wears a traditional uniform consisting of a long black robe, white shirt, and a three-cornered hat known as the tricorn.

The Clerk The Clerk is an expert in parliamentary rules and procedures, and advises the Speaker on these rules so that he can maintain order in the Chamber. In order to communicate easily with the Speaker, the Clerk sits at a long table in front of the Speaker’s chair. The Clerk is also responsible for keeping track of the votes in the Chamber, and monitoring time during debates. After a provincial election, the Clerk swears in the newly-elected Members of Provincial Parliament.

The Sergeant-at-Arms The Sergeant-at-Arms is responsible for maintaining law and order in the House on behalf of the Speaker, and for overseeing the security services and property management at the Legislative Building. He is also the guardian of the Mace, the ceremonial staff used in parliament to symbolize the authority of the Speaker in the House.

Hansard Reporters Hansard is the word-for-word account of the daily proceedings of the House and its committees. Named for the family that began the tradition in the British House of Commons, Hansard has been the official transcript of Ontario’s House proceedings since 1944. Transcribers sit at a table on the floor of the Chamber and use laptop computers to record the proceedings. The text is then edited and printed overnight, ready for distribution the following day.

The Legislative Pages The Legislative Pages are students in grades 7 and 8 from all over Ontario who act as messengers in the House. They also meet with politicians and officials and learn about how laws are made and how the province is governed. Pages typically serve a term of duty that lasts between two and four weeks, and are granted a leave of absence from school to work at the Legislature. While on duty, Pages wear a uniform consisting of a black suit and tie.

Members of Provincial Parliament (MPPs) Ontario’s 124 MPPs are elected to represent the concerns of their constituents regarding provincial responsibilities at the Legislature and in their ridings. At the Legislature, MPPs may be assigned different roles by their party leader such as House Leader or Party Whip. They may also be assigned additional responsibilities as Cabinet Ministers, Parliamentary Assistants, Committee Chairs or critics. MPPs from all parties also take part in Legislative Committees. Members that are not assigned special duties are referred to as backbenchers.

When not at the Legislature, MPPs have a number of responsibilities in their home ridings such as meeting with constituents to listen to their concerns, helping to resolve matters related to provincial government services, and attending community events such as school openings or local fundraisers.

The Government After an election, the party with the greatest number of elected members is asked to form the government by the Lieutenant Governor. A governing party holding at least half of the seats in the House is called a majority government. If it holds less than half it is called a minority government. The leader of the provincial government and also the leader of the provincial party with the largest number of elected MPPs becomes the Premier of Ontario.

The government is responsible for setting priorities and administering policies that take care of the day-to-day running of the province. Some of the major roles and responsibilities of the provincial government include education and health care.

The Premier The leader of the political party with the largest number of elected members is called the Premier. The Premier is the head of the provincial government, and is responsible for working with the Cabinet Ministers to develop policies and set priorities for the government.

The Opposition The opposition parties in parliament serve to keep the government of the day accountable. The opposition may be comprised of one or more political parties, and the leader of the opposition party with the second-most number of elected candidates after the government party is referred to as the Leader of the Official Opposition. Leaders of other recognized parties are referred to as Leader, followed by his or her party’s name. A political party must have at least eight elected Members to be considered a recognized party in the House.

The Whip Each party has one member who is appointed as the Whip. The Whip ensures the presence of party members in the Legislature or at committee meetings to maintain adequate representation should a vote be held. This member also arranges the business of his or her party in the House and informs party members of forthcoming business.

(Link to PDF version and Answer Key below) 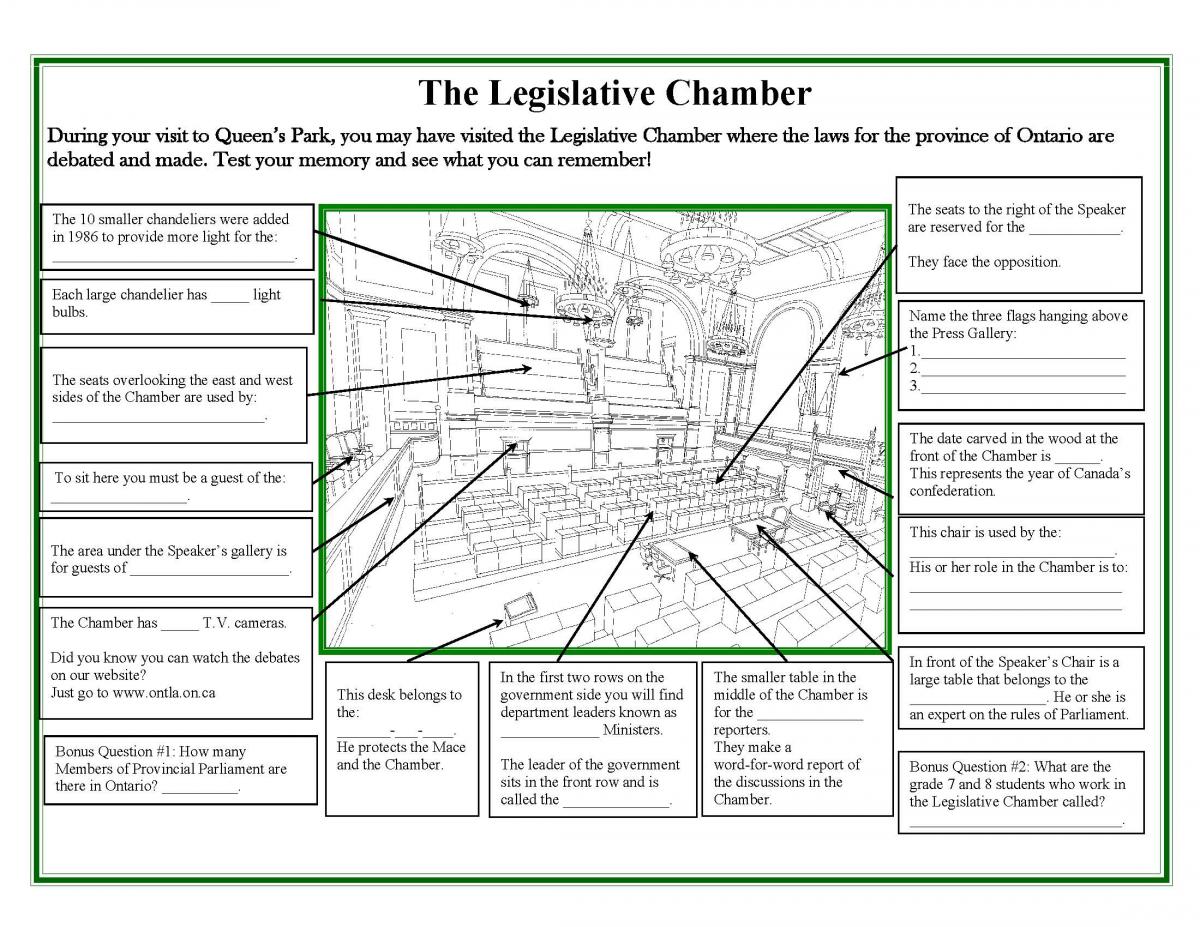